i am in contact with a guy on gbfans who has started a new website, ghostbusterscanada.ca
the site basically acts as the canadian gb yellow pages, with contact info and pics of franchises all over canada..... he would like to fill some spots in the quebec section so i told him i'd check with everyone here, i will be giving him info on gb estrie for sure, but i thought it would be cool to let him link the centrale, and possibly provide him with the the quebec logo's for the site as well. what do you all think? with a page like that, it would make it easier for people to find us and perhaps bring on more activities or events, like the one in hudson for halloween, for those of us interested. let me know

im for it, good publicity are always welcome and specially for finding parts and stuff

we'd need contact info for the groups (Ghostbusters Estrie, SFM) and the central. I think it would make sense.

no they have nothing to do with GBI, they are just a canadian hib for franchises, so if you want for example to get in touch with gb's from say, british columbia, you go to the website and click on bc, and it will show you all franchises in bc with contact info, a write up on the group photos, etc. like i said,it's sort of like the gb's of canada yellow pages. it also has links to forums and other sites, like gbfans and proton charging...

jessejames51 you had the contact with the guy if you wante you could be in charge.

1- ask him what he need for info

Glad to do it! i'll e-mail him and ask for all info necessary. and we'll get this done for after the holidays!

i spoke to todd, owner of the gbcanada site and he would like the following for the franchise listings.......
(copied and pasted from my e-mail)
- A Small introductory write-up introducing the franchise, perhaps when you were founded, what kind of work you do, events you attend, etc. Feel free to indulge in fiction a bit, similar to how I said for BC that we formed after "interviews with Dr. Stantz"... not really, but most of us met at Dan's signing in Vancouver.

- A Roster list of members with photos, ideally a small solo shot could be in gear, but it doesn't have to be, along with a fun fictional job title, eg: I'm "Public Relations", could also be something like Containment Specialist, Research and Development, Experimental Technology, Accountant, whatever! I can always add to this as you get more members who want to put their names and pictures out there

- Links to your official websites if you have them, if you don't that's okay too so long as I can give a contact e-mail on the website.

A group photo and Franchise logo would be great, if you don't have those right away, I could just put the Maple Leaf logo in it's place in the meantime.

being a quebec listing, he asked if we would be able to do both french and english for our write ups, and he says that any changes can be made at a later date, including updates on members, or change of pictures, or whatever.....

so sfm, and sfe will be registered as quebec franchises, and we will link the centrale as the website????
no rush, with the holidays, lots of people are busy so, we can get our stuff together and make the listings for the new year. sound good?

i just in the pics and info for ghostbusters estrie as well as the centrale logo to head up the whole quebec page. when it's up i'll let you guys know so you can see it.........hopefully sfm soon?

Cool thx to take care of it jess!

The estrie page is now online at www.ghostbusterscanada.ca
I will need some more info and pics and stuff for the rest of it to add in sfm for example. Check it out and tell me what you think and what chabges you might think need to be made. Also if someone could possibly pass me the missing things I need to include everyone. Thanks!

"SOS Fantomes Montreal" a.k.a. SFM.) fan/costumer group who recreates the ghost hunters, since 1989 in different event charity,Halloween and convention national and international . 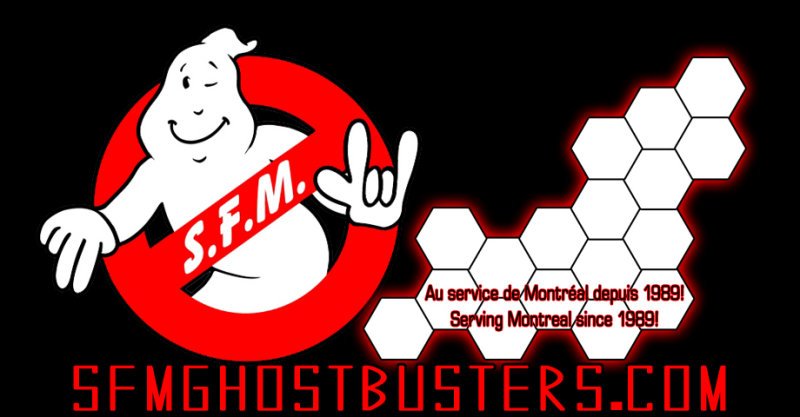