So here's some pictures. I didn't take any WIP shots, because really I'm just useless with tools and everything was going wrong..

Studio Creations shell
MultiMediaMayhem resin parts/tubes/etc
LC-1 ALICE frame from ebay (need a belt for it)
Throwing Chicken body
Fifth_Beetle rubber grips
CRIX acrylic lenses for the pack
picture frame holder to hold the wand to the pack
lid from a medication container to lift the holder a little off the pack (totally forgot to paint it, but it's temporary)
wood for the motherboard (I think it's 1/4")

painted the pack shell Krylon Fusion Nickel, put some mustard on some edges, then a coat of Krylon Hammered Black.. I had some random cans of matte black left over, so the final coat is a mix of Montana '94 Black an Ironlak Matt Black.

had problems getting primer to stick to the resin parts, but weirdly not regular paint, so I ended up painting them with the Montana '94, then a layer of krylon Fusion, then some mustard on the edges, then another coat of black.. 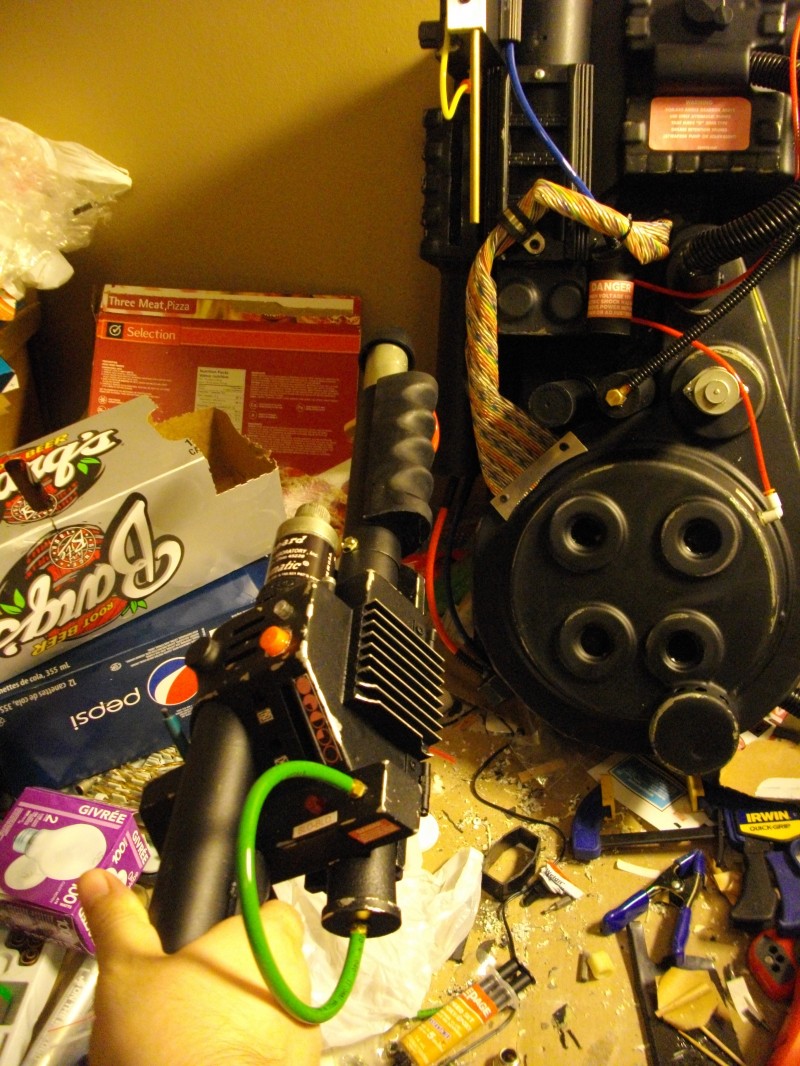 I still need to get some styrene sheets to make the plates around the cyclotron.. I've got a D-42 vacuformed bumper coming soon.. then make the shockmount with some washers..

I also need to finish the end of the wand.. don't have the ears, clear tube, banjos or trigger tip.. right now it's just a smaller pvc pipe that's painted silver with a flashlight head epoxied to the end, a loose piece from a cheap battery-operated "dremel" and an extra clipard elbow..

weathering on the pack is just taking some light sandpaper to the areas that I put some mustard on, and for the wand I did it with an On The Run chrome paint-marker..

Thanks! It's not as accurate as a fiberglass shell, but I find it came out surprisingly well for a vacuformed shell! Really the biggest difference that I find is that there isn't that little raised part where the two tubes go.. I could have probably done something to fix that, but I'm useless when it comes to doing any sort of work with tools or doing anything "handy" like that

Doesn't look like a vacuformed shell at all. And yes, that's a compliment.

Doesn't look like a vacuformed shell at all. And yes, that's a compliment.

Thanks! I actually used your build as my reference for where everything went more than I used any pics of the actual packs or screenshots from the movies!

Seriously, thanks, that's a great compliment.

very nice indeed! definately gonna be sweet when it's done. i have my own solution to the shockmount, you can see pics in the a vendre thread. doing a great job though, keep it up!